Asia
Suggested highlights Jo Meintjes recommends on individual tours, which can be added to an existing Expedition cruise in some instances, or taken on its own.
Bhutan
Jo visited in 1999 and found this a fascinating landlocked country with morals and manners dating from the 1950’s. It is hugely mountainous and it’s best to join a tour to visit the outlying towns and villages. At least 2 weeks is preferable to explore these fascinating hill side dzongs and appreciate the culture and scenery.

China
Beijing – The Great Wall and Palaces; Silk Route includes Kashgar, Urumqi and Buddhist Paintings at Magao Grotto; Panda Reserve near Chengdu; Tibet and the road to Nepal. In winter it still a possible destination to see the Harbin Ice Festival, Beijing sights and pandas near Chengdu. 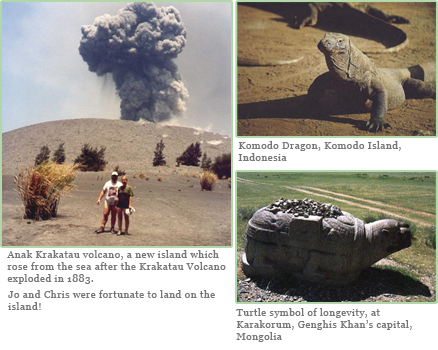 Indonesia
Java for volcanoes and national parks; the unspoilt islands of Lombok and Komodo (for dragons); Anak Krakatau volcano; Ujon Kulong to spot the rare Asian Rhino. There are many possibilities further afield for cultural and wildlife experiences.

Central Asia
Jo Meintjes designed and escorted a very successful tour for 10 clients in April-May 2008. The group followed the Silk Road into Kazakhstan, Kyrgyzstan, Uzbekistan, Tajikistan and Turkmenistan following the Silk Route. Read more about the 2008 tour here and please enquire what is planned for the 2014 tour.

Japan
Jo Meintjes visited Japan in the Winter months of February 2011 to see the Ice Festival in Sapporo, the Red Crowned Cranes (2nd most endangered Crane species) and the famous Snow Monkeys that bathe in the thermal pools. Several rides on The Bullet Train and exploring the cities of Tokyo and Kyoto made it a memorable adventure. Should you wish to cruise or have a custom made itinerary on land please enquire.

Mongolia & Siberia
For the famous Mongolian Steppes; via Trans Siberian train or fly to Vladivostok, Lake Baikal and Irkutsk are just some examples. Horseback safaris also available. If clients want to drive from London to Beijing Jo Meintjes has even found an operator willing to tailor-make this expedition.